Does a Modest Stipend Encourage Girls to Attend School beyond the 5 th Class: Evidence from the KhyberPakhtunkhwa Province of Pakistan?

In April 2017, Musharraf Cyan, Mark Rider, and Michael Price published a working paper examining the effect of stipends as an incentive for girls to continue their education beyond the 5th class in Pakistan.

Musharraf Cyan, Mark Rider, and Michael Price. 2017. “Does a Modest Stipend Encourage Girls to Attend School beyond the 5 th Class: Evidence from the Khyber-Pakhtunkhwa Province of Pakistan?”  IDEAS/RePEc: Economics and Finance Research. RePEc:ays:ispwps:paper1707.

“According to a recent report by UNESCO (2012a), Pakistan has the second 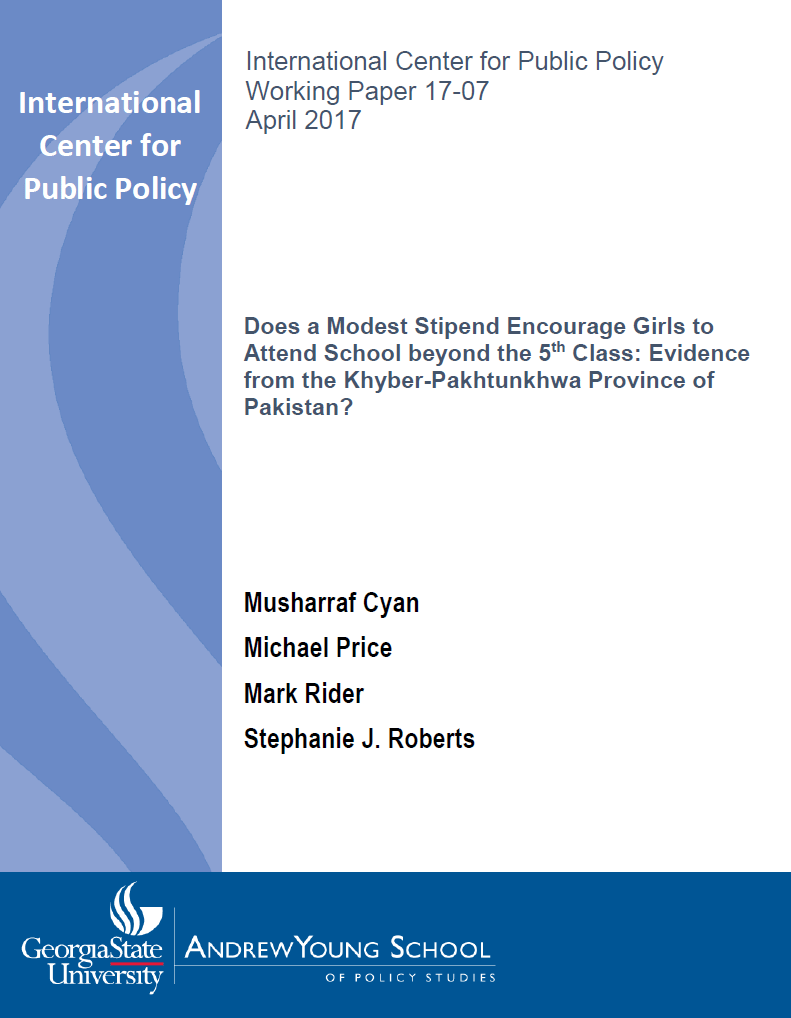 highest number of children in the world that are not attending school, despite increasing primary school net enrollment rates from 58 percent in 1999 to 74 percent in 2010. According to the same report, 25 percent of Pakistanis aged 7 to 16 in 2007 have never attended school. Furthermore, there is a significant education gender gap in Pakistan. Memon (2007) reports that for children enrolled in school, attendance rates are 20 percent higher for males than for females, with 50 percent of enrolled boys regularly attending school compared to 41 percent for enrolled girls. Regarding Pakistan, UNESCO (2012a) reports that more than two-thirds of all children never attending school are female. As adults, many more women than men are illiterate; two-thirds of the 49.5 million Pakistani adults that cannot read are female. This paper includes a brief review of the literature on the obstacles to female education in developing countries that are believed to contribute to the gender gap; literature on some of the economic and social consequences of an educational gender gap; description of the survey instrument and sample design; summary of the main empirical findings of this study, and;  conclusions.”-IDEAS/RePEc:Economics and Finance Research-